The Boston Leather Two-Ply Junior Sap is a variety of impact weapon that measures 8 1/4" long and weighing 9.5 ounces making it larger and heavier than the equivalent ply Midget Sap. This Boston leather sap is constructed of two layers of durable, heavy gauge leather that encase a molded lead weight on the end. With the spring steel shank in the handle, a snap of the wrist is all it takes to apply a stopping force with this self-defense tool. Boston Leather saps are made in the USA.

Sometimes you need something to help you feel a little safer, this Boston Sap does just that. Exactly what I wanted and needed, perfect selection on my part, well made on yours.

The stitching is a little off. Not a high-end, heirloom kind of thing, but for the price it's a good solid sap. It works and I like it.

I like it, its well made and fits easily in a pocket. It is a little shorter than I remember but hey, I'm old! Good craftsmanship...it'll do the job.

I've carried a sap with me almost every day for the last 12 years, having carried a Boston Leather 4 layer Junior mostly until I lost it a few months ago. Comparing quality in one purchased 12 years ago until now I would have to say their quality control has hit rock bottom. I don't expect $100 quality, but I would have expected better from Boston Leather. I went with this 2 later as a replacement and have some issues.
1. The lead slug isn't centered in the head.
2. The stitching follows the off center slug rather than the edge.
3. The end point of the stitch is more of a jumbled mess on the face of it rather than being tied inside of a stitch hole like my last one was. 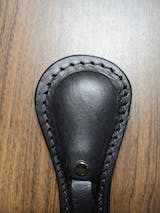 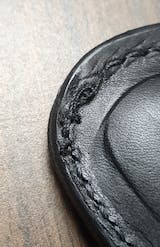