The Nex Walker series batons are constructed using a strong but lightweight aluminum handle with two enhanced steel extendable shafts that lock firmly into place when deployed. These are equipped with a removable clip that can connect to the baton handle in 10 different positions. Nex Walker batons are ideal for undercover use or anytime concealment is a must. These batons feature a built-in ceramic emergency glass breaker on the tip. Easily closes by depressing the button on the end of the handle and pushing the tip inwards with you hand.

I think this is a fantastic baton.

I think it’s tragic that this site doesn’t allow a quick 30 second review video,.. so viewers can see, hear and get the feel free of how it works in motion,.. It’s like 1 dollar a year in server space : (

But whatever, I included some lame, still photos.

It’s a great concealable baton, I’ve been training hard with it for a week, delivering hard blows on a heavy bag, it’s still smooth to extend, and push button close works great too.

It makes a cool,”Shwink, shwink” sound when it moves in and out. People that have them already know about the cool shwink, noise. But since there’s no video uploads, potential buyers will have to take my word for it, and just assume I’m right about the shwink sound as well as it’s level of coolness. 🤔

I’ve not used this for pushing/stabbing attacks. So I can’t say how well it stands up to that type of abuse.

I’ve seen a handful of videos that make me think it rocks those challenges too.

Lastly, there’s a tiny, ceramic ball on the uppermost segment that should just about vaporize tempered glass.

So if you need to exit a wrecked vehicle, or help someone out of it, you should be good there too.

I think it’s a shame retailers like Amazon choose to sell pepper spray, and tasers like crazy,.. but won’t sell these because they’re considered weapons.

That’s just sad. I also think states that make a 12” batons illegal under the pretense that its primary use is as an offensive weapon,... probably need to be using a more effective, offensive weapon system. 😆

I think every person in the states should have one of these and be trained to use it.

It’s perfect for a “back up off of me” self defense tool.

School girls aren’t going to be knocking 200lb MMA fighters to the ground,.. but they can sure as hell ruin some punk, mugger’s day,... and his knees! And probably his face,.. maybe break a couple ribs and fingers,.. we don’t know what kind of rage this imaginary school girl has locked away,... besides, she didn’t start this fight! 😅

While I can understand how these tools could be used offensively, especially if they’re trained with, regularly, it still really chaps my hide that States still chose to make carrying of these tools, outside your home or dojo, illegal.

If you’re using a tool to commit a crime,.. for sure, make that illegal. But if you’re defending yourself against an attack to yourself or others and utilizing what you have on hand to neutralize that attack,.. it seems strange to make laws against it.

Even so, as many states outright, outlaw carry of batons, and many others have produced grey area laws that create liability for the person carrying the baton, I would encourage you to look into your local laws prior to purchase.

That said, the baton itself is excellent. With the nearest priced competitor with a push button close at double the price,.. I really don’t think you can beat this value.

If you can spend more, do it. If this is what you can afford, I think you will still be very pleased.

I will be buying more of these as the budget allows. Even if it comes to pass that laws prevent carry outside my home, I still like to use and train with them inside and the open/close feature on this thing is just about the best figet toy, ever.

It’s so much better than doodling, when you’re on hold on the phone. 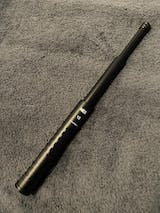 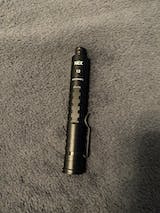 Seems to be good quality. Fast to deploy and collapses nice and easy. Would buy again

I was impressed with the quality of this baton. I’ve had other models and brands, but this Nex baton is by far the best of all of them. Compact, light, and easily carried concealed. The deployment is very smooth without any binding whatsoever. It appears to be very well made, hopefully it will continue to operate smoothly in the future. If I order another baton, it will surely be a Nex.

Light, compact, will definitely do the job it is intended for. Can carry in pocket or on holster comfortably. Hope I do not need to use. Makes early morning walks in the dark more comfortable.

Well the way things are developing into today's society you need to be aware and be ready.
Non lethal first hopefully that will get you out of any potential situation first.
Needing something easy 2 conceal,not over excessive,solid to carry with confidence for everyday goings on just in case.
This Nex Walker fits the bill perfectly. Easy to conceal,easy to carry.
Draws out fast and with a push of a button retracts in a snap.
Very solid will most definitely serve the purpose intended for.
Hopefully not but if it should rise feel very good and confident carrying it.
Priced right,shipped fast.
Does come in 3 lengths,will probably order a larger size for home. Very good product. 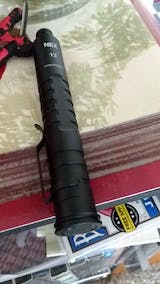